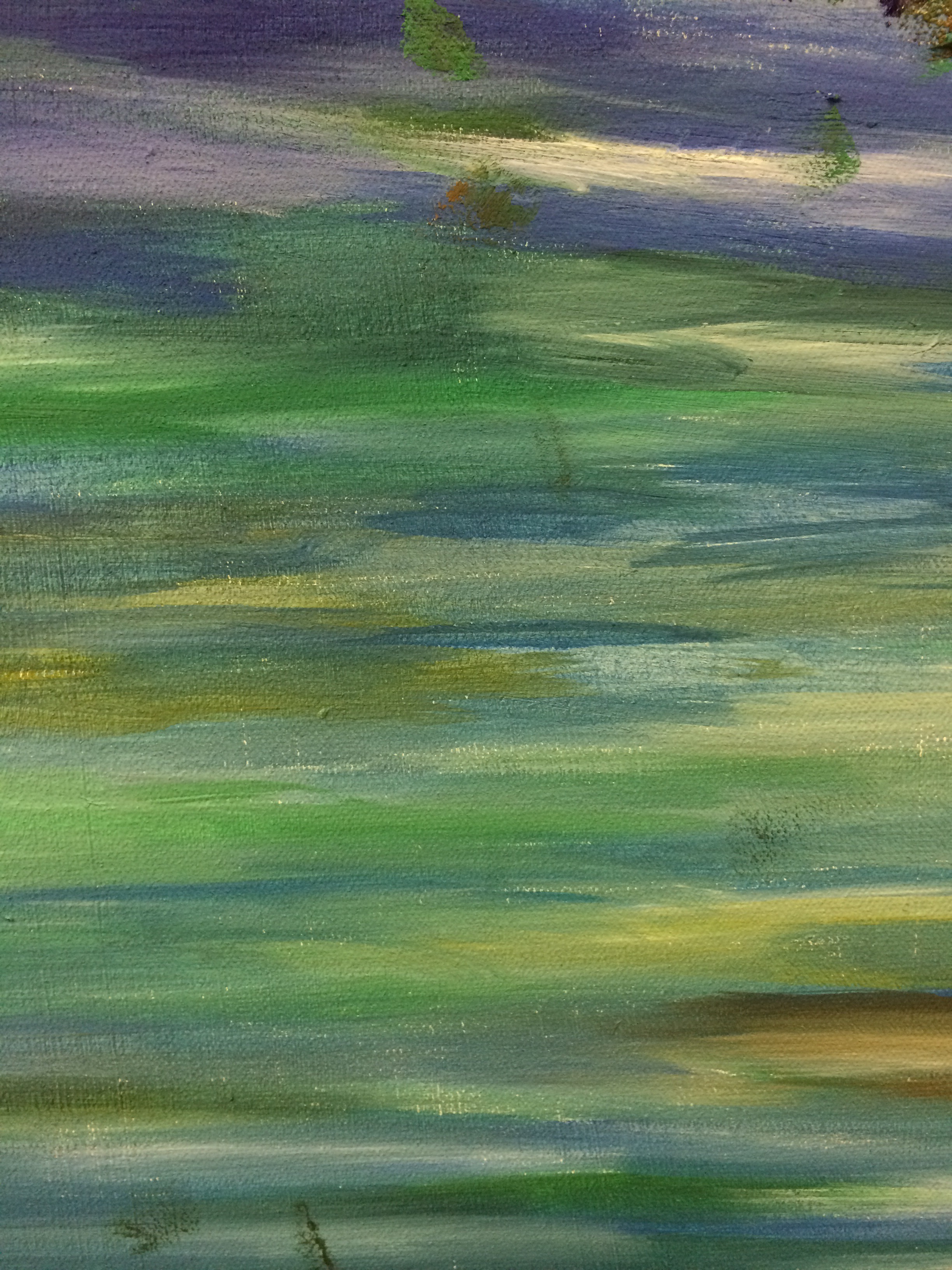 The main concept behind my painting is the confusion of reality, and the interconnection between man and nature. With the increasing growth of the manmade structures, nature is often pushed to the side, and sometimes even forgotten about. In a world where everything is electronic, we can often forget what reality is. My painting is a part of this story, a question of reality encapsulated in the wilderness of nature.

My work presents a large, portrait canvas, depicting a water forest scene and a partially derelict house. I was initially inspired by the work of Peter Doig, and his Concrete Cabin  (Doig, 1994) and Reflection (Doig, 1997) pieces. These are melancholic and contrasting pieces depicting thin forests. From these, I began to experiment with oil paints to create the same sense of depth within the forest that I would paint. This led me to the contrasting and colourful backgrounds of Zeng Fanzhi, with his bright backgrounds and dark, mysterious twigs in the foreground (Fanzhi, 2015). Inspired by this, I wanted to create the same contrasting atmosphere using a similar palette and repetitive layering of the paint. Under The Skin, a 2013 film (Under The Skin, 2013), further informed me of a large forest with unknown events occurring all around and to the central character, and also the depth and detail of forests, which I wish to recreate.

In my own work, I wanted to have a contrast in mood between the forest and the misty, colourful sky. By referencing the earlier artists, I hope to confuse and question the viewer as to “which way is up”, a question inspired by James Elkins (Elkins, 2009, pp. 11-32). I also wish to evoke the memory of nature in the viewer as they live in the ever-growing electronic world.

My piece presents ideas about the confusion of reality and the interconnection between man and nature through a contrast of colour and mood. The painting depicts a grand, overwhelming forest rising out of a lake, next to a small, derelict house sitting on the water. The contrast between the deep greens and blues of the forest and the light washes of reds and yellows in the misty sky distinguishes the contrasting atmospheres and highlights the interconnection and the power that nature has over man. 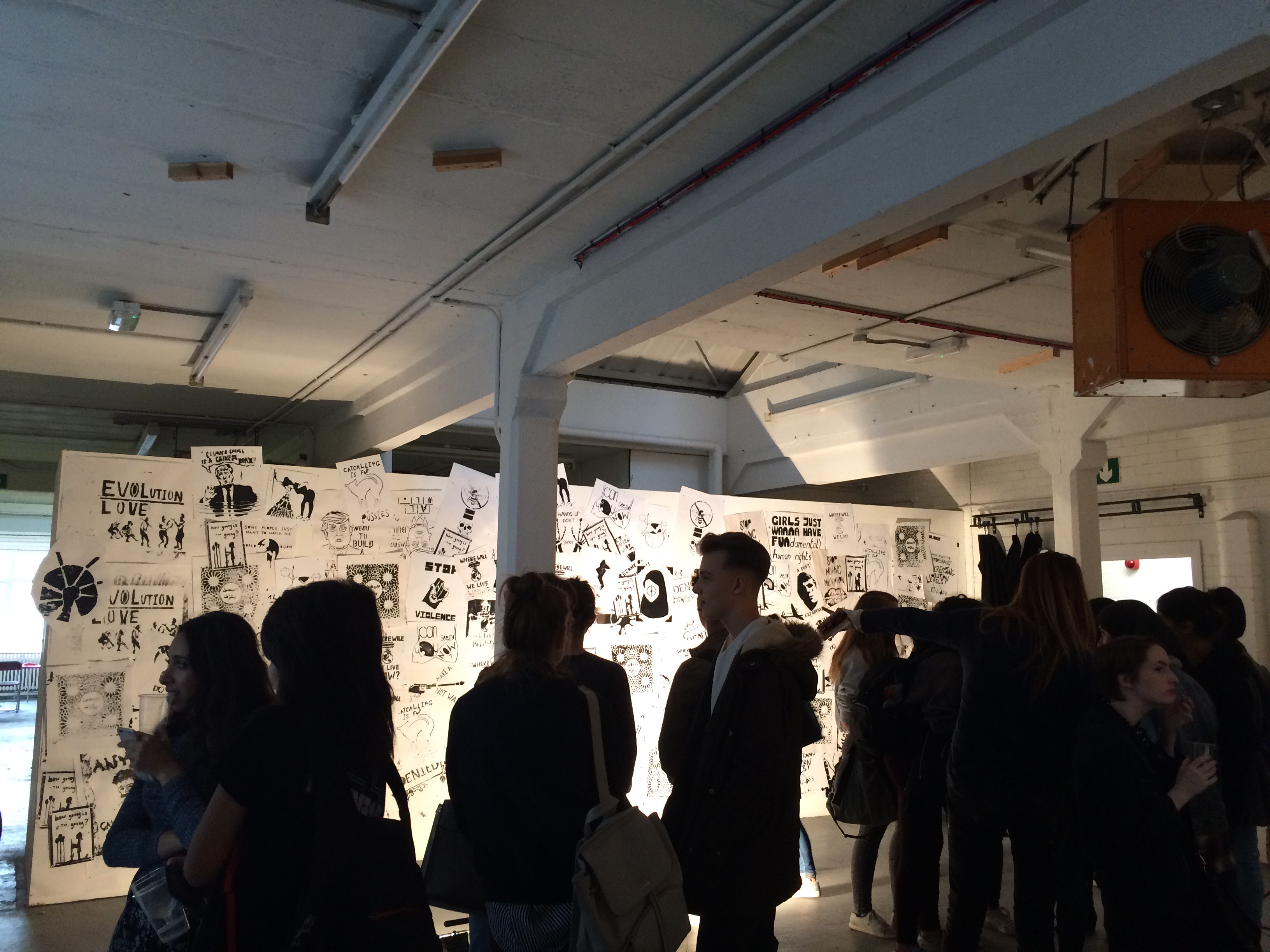 And so it happens! Our first art exhibition as a Year 1 Art (and Psychology) student! It of course featured free wine, coke, orange juice and crisps. It was so nice to see everyone’s up on the wall after some incredibly hard work was done. For those who don’t know, our year is split into two groups depending on which day we get taught the Studio module. For us this year, it is the Monday group (my group) and the Thursday group (our enemies in this particular battle). I do have to be incredibly biased in this situation, however, and say that the Monday group definitely won this battle… And yet the war continues! 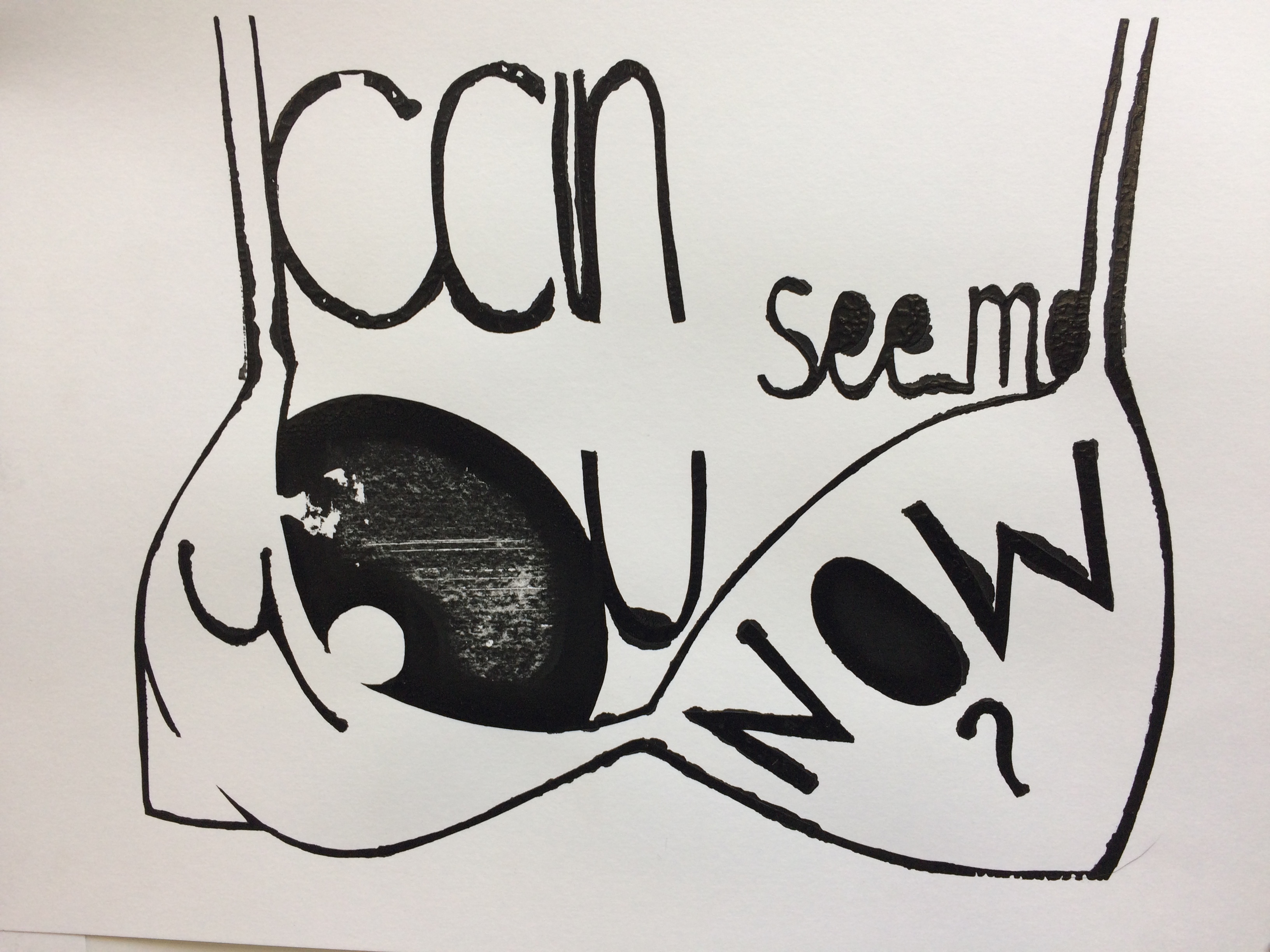 FIRST PROJECT OF THE YEAR! (Not including the summer project.)

So from the Introduction to Political Prints session that we had, we were given the task of producing our own political prints.

Here was our task debrief;

Art has had a troubled relationship with propaganda, which is frequently seen as overly didactic.

The history of print as a medium is often associated with radical politics. From the Russian constructivists to the art students of May ’68, to contemporary protest posters from many artists in countries around the world, artists have used print to create quick and bold statements, to combine images and text.

Using stencil printing, we would like you to produce an image that functions as a piece of propaganda in response to the challenges we face today in our societies and in our cultures. Consider the relationship between the imagery you use and the concepts you are exploring and think about what issues you would like your 2016 student revolt to address!

There are a lot of things that I feel passionate about and that I could do my stencil printing on, including the topics of; endangered animals, brexit, the American elections, sexism and feminism. But after a few hours of having a sit down, think, and a doodle (what else are you supposed to do?), I came across the quote

Can you see me now?

This led me to looking at the topic that was raised a few months back;

When this hit the news, I felt incredibly passionate about the topic. My take on the subject was all about the women who were breastfeeding their babies in public. This is in no way, shape or form, is a sexual act, unlike how some men and reports I found were showing this. It is a simple act of the human body to want and need food, including those babies who still need fresh milk from their mothers. It did, however, become a fashion statement very quickly. This personally annoyed me as many of the articles reporting the ‘#freetheboob’ movement, were commenting on how uncomfortable bras were and how it is just commercialism that is making us buy bras. How ‘Free the Nipple’ became summer’s biggest fashion trend – EveningStandard. Yes, it has been scientifically studied as to whether women need to wear bras or not, and apparently we don’t, (Here’s Why You Shouldn’t Wear A Bra, According To Science – IFLScience) but that doesn’t mean we need a hashtag and a fashion trend about it, especially when it draws it away from the Free the Nipple campaign, which is very different.

…a global campaign of change, focused on the equality, empowerment, and freedom of all human beings. Free the nipple has become a premiere voice for gender equality, utilizing all forms of modern media, to raise awareness and effect change on various social issues, and injustices.

Looking closer and at more detail of what the Free the Nipple campaign truly stood for, I was inspired to create my own piece of propaganda to support the campaign.  I couldn’t exactly just whip off my shirt to reveal no bra to show my point, like hundreds of men and women did on Brighton Beach to protest against the social media policies banning on the female nipples. I could, however, create a stencil printing, using my new found information on the Free the Nipple campaign, and the quote that inspired all of this; Can you see me now? I did have to take a moment to figure out what I could do inn order to get my point across – the female, and the male nipples, are something that we should not be ashamed of and that we should not hide. It should not be a taboo.

I therefore created the following design whereupon the nipple and the boob that are uncovered are the centre of attention, being the focal point of the print.

I initially couldn’t decide on whether I wanted this design, or to invert it and print where the majority of the page was black, showing a white boob and a black nipple. However, I soon realised that this could not be done as there would be multiple areas of the print that were not connected, hence I went for this design.

I also changed the composition of the wording several times. The consistent parts were the bra itself, the O, U and nipple. Initially, the ‘o’ of the ‘now’ was smaller, as to represent the other nipple. I did change this as it looked, to me, out of place, so I changed it to the now, larger ‘O’. I also changed the composition of the ‘y’ as originally it was vertical. The reason for this change was due to it being more aesthetically pleasing, but looking back, it now also follows the curvature of the breast which accentuates both the breast and the nipple.

Our exhibition isn’t fully up yet, but will be open on Thursday afternoon, so more photos and updates soon!