Western artists have been presenting their visions of what art should be in the form of manifestos since the 19th Century. From Joshua Reynolds’s Discourses to the impassioned avant-garde manifestos of the Futurists, Cubists, Surrealists and Vorticists in the early part of the 20th-century, to the powerful Feminist Manifestos of the 1960s and 1970s, the course of art history and how artists respond to the world has often changes as a result. Many contemporary artists continue to set their objectives out as Manifestos on paper today, more often with humour but always with some kind of vision to create better art and a better world.

Using hand made or digital text, we would like you to produce a manifesto with a peer that proposes a vision for making/living/working/being an artist. Using the example manifestos discussed in your lecture and seminar as a starting point. Consider how language and typography in an Artist’s Manifesto might function to visually articulate the challenges we face today in our societies and in our cultures.

I decided to team up with someone else in the Monday group to create our own manifesto on the topic of our prints; about the equality of people, and the way in which this comes across in our different topics.

We decided on the plan of writing a list of rules that say how we should free the nipple, or wear the Hijab (her point was around the topic of France banning the Hijab due to terrorism and the recent terrorist attacks. Hopefully with her permission, I can post the link to her blog to show you how she explains the process of which we went through for her points on the manifesto), and yet at the end we would completely contradict ourselves all together with a final statement saying about that it shouldn’t matter about what we wear or what actions we take to show equality, we should all just be equals.

We decided on the initial plan (as you may be able to see incredibly roughly) of having 5 separate points on the political, law, social and views of the opposite sex. When researching these, I wasn’t expecting so many…

Here are my top picks, and links included for extra reading; 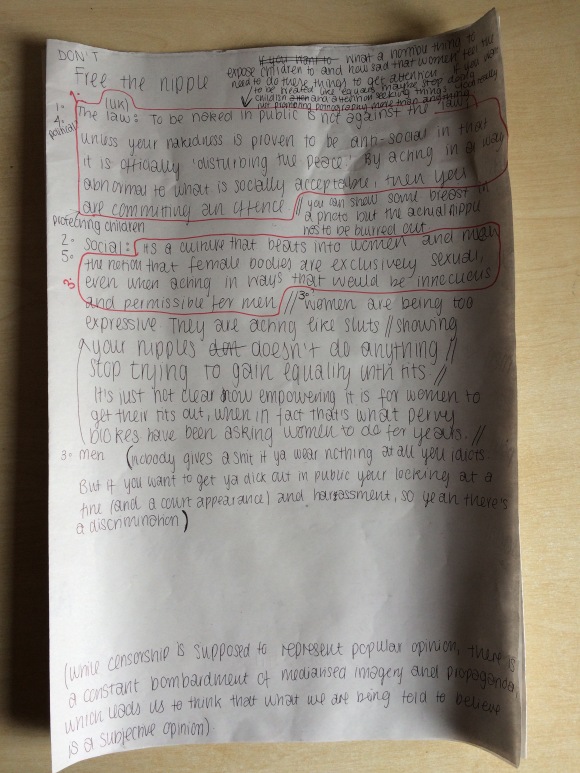 Throughout the thought process, we also said NO HELVETICA! We not only found the font to be predictable and kind of boring, but the political, historical and social context of which it has come from is something that we did not want tied to our piece. We decided on two ‘foreign’ fonts that were located on the internet which resembled the argument that we held. For my partner, we found a very arabic-based font which accentuates her argument of the Hijab. My own font was based on the ‘sexy font theory’ (as I have so aptly named it), where it has been found that big loops on the letters ‘g’, ‘y’ and ‘p’ (I believe it was p), is classed as sexy writing. This once again, accentuates the side of which we are arguing.

The list was a simple choice for us as we found it to be the best way to get our points across, loud and clear. The handwriting in some respects does take some of this away. however, we found that it does make our arguments somewhat clearer. This would have been harder to do (we thought), by hand as the lettering would have been more detailed, making it a bit more complicated. We wanted to keep it simple and yet keep our fonts in order to have that clear difference.

Colouring of the composition was chosen from ying and yang. This is kind of a classic example, however after testing out several colour pallets, no other colours simply matched our argument, and matched our poster like the simple colours of black and white. This, admittedly, took up a long of ink when printing, however it was worth the choice. We decided to add in the small parts of red, highlighting six words in total and underlying the ‘Do Not’ on either side, as we felt is excentualted our arguments further. Highlighting those words in particular also gave rise to them and caused them to be a further topic of conversation in our manifesto. The composition and the colour was also altered when we found the best conclusion to fit at the end. The contrasting colours of the conclusion and the individual pages, and also the contrasting pages all harmoniously fits together, and yet it continually makes the point that we are different, and we are all at war with each other, even though we are equals. Doesn’t make sense does it? Don’t worry, we will just leave you hanging with all the questions and conversation topics that come with our manifesto.